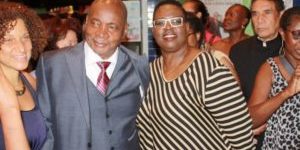 THE MIGHTY SPARROW will be ATTENDING the OPENING NIGHT RECEPTION and Q & A!
September 3 @ 6:00 p.m.

Slinger Francisco, better known as The Mighty Sparrow, affectionately dubbed The Birdie is the unrivaled Calypso King of the World, with a career that spans over 40 years. This artist par excellence has earned his rightful place as “King of the Calypso World”, defeating every other pretender to his throne

The fest kicks off with a delicious Caribbean reception on Wednesday September 3, in association with the Consulate General of the Republic of Trinidad & Tobago in Toronto at the Royal Cinema, 608 College Street. The evening will include the World Premiere of The Glamour Boyz Again! Sparrow and Superior on the Hilton Rooftop (Geoffrey Dunn, Trinidad and Tobago, 2014, English, PG). The feature-length documentary reveals a remarkable acoustic performance by two of Calypsos most venerated figures, the Mighty Sparrow and Lord Superior. The film includes reminiscences by both Sparrow and Superior, whose friendship dates back more than 55 years, to the mid-1950s. Sparrows execution at the Hilton is arguably his best-rendered acoustic performance ever recorded.

The annual CaribbeanTales International Film Festival (CTFF2014), returns to Toronto beginning September 3 Caribbean films from 15 selected countries around the Region with public, community and online screenings. This includes 11-feature length and 20 short films 7 are in competition for the CTFF Audience Prize, which will be announced on Closing Night September 13.

YURUMEIN (your-o-main) is an important UNTOLD STORY of Carib/Garifuna resistance against slavery that deserves its place in the annals of the African Diaspora. The film recounts the painful past of the Caribs on St Vincent and the extermination of scores of their ancestors at the hands of the British, while building an intimate portrait of Garifuna culture in-transition today. We are given firsthand accounts from both Carib descendants who remain on the island of St Vincent and voices of returning descendants whose ancestors were exiled to Central America; where Garifuna traditional culture was able to survive and flourish

The tale of Janet Rosenberg is almost too fantastic to be believed. It’s the love story of two idealistic young radicals, the Chicago-born Rosenberg and Cheddi Jagan, a native of Guyana on South America’s northern coast, who fell in love, married and set off for the British colony to start a socialist revolution.

Though Jagan and Rosenberg became the most important political figures in Guyana, they also faced arrest, repression and the active oppression and intervention of world figures such as Winston Churchill and John F. Kennedy. At one point, the British press even dubbed Rosenberg the “Second Eva Peron.”
After years of tireless work, free and fair elections were finally instituted in Guyana in the early 1990’s, and Janet Rosenberg-Jagan was elected the first foreign-born, female president of the country in 1997. Combining biographical portrait with social and political history, THUNDER IN GUYANA illuminates an overlooked corner of recent history in a story packed with real drama.

Poetry is an island is a feature documentary film about Nobel laureate, poet, playwright, and visual artist, Derek Walcott. The film depicts an intimate portrait of the poet, as we visit his art studio, his childhood home, and his current residence in St. Lucia. We share Caribbean moments with Walcott as we visit some of his favorite places, his studio, and St. Lucia home. We discover the anger and frustration that the poet holds against the downtime of the arts as he talks to us about the meaning of poetry to him personally, and about the significance of art for humanity. Family members reveal some of the poet’s life challenges, and people who have worked with him speak frankly about their experiences with Walcott. Poetry is an island is an intimate portrait of the man, the poet, and son of the Caribbean: Derek Walcott.

Set in Guyana, South America, ANTIMAN is a film about self-discovery and masculinity in the Caribbean. Anil, an introverted young boy, is pressured by his abusive father, Max, to become a skillful cricket player the way he himself was years before. Although skilled in the game, Anil refuses to play and takes refuge in his love for Dano, an older boy in the village. In order to attend the local masquerade and see the boy he pines for, Anil must win the cricket tournament.

The recipe for dal puri traveled with indentured workers from India’s Gangetic plain to southern Caribbean colonies of Britain and the Netherlands in the 19th Century. In the 1960s the wrapped roti migrated from Trinidad to North America, where it is known as Caribbean or West Indian roti and is popular in cities like New York and Toronto. As the dish moved from home fire to street stall to restaurant chain, and from festival to fast food, the flatbread was radically transformed in ingredients, cooking method, ways of eating and identity. Shot in Toronto, Trinidad and India, this documentary tracks dal puri’s remarkable passage across space and time, linking colonialism, migration and the globalization of tastes. The documentary features interviews with leading food writers and scholars including Pushpesh Pant, Naomi Duguid, Brinsley Samaroo, Radhika Mongia and Patricia Mohammed.

“Best of the Fest”

Finding himself stuck in the violent ghettos of Kingston, Jamaica, a sympathetic street hustler (Christopher Johnny Daley) devises a daring but not-so-clever plan to steal a fancy sports car, right under the owners nose, after which things rapidly go downhill until he finds himself at rock bottom and begins to realize that he has to change in order to fulfill his dreams Awards: Best Diaspora Feature, African Movie Academia Awards (AMAA) 2014, Festival Programmers Award- Narrative Feature: Pan-African Film Festival 2014, Audience Award and Special Mention Best Mention CaribbeanTales Toronto Film Showcase.

COLOUR ME is a documentary film that will change the way you think about race. We follow motivational speaker Anthony McLean into the ethnically explosive city of Brampton, Ontario – where is his forced to critically examine his own identity while mentoring six youth grappling with theirs. At a time when statistics on black youth in crime, drop-outs, and pregnancy are rising, we ask ‘why’ while exploring the confines of race, the complexity of identity and the need to find our voice.Cricket Nation
Stephen Young-Chin | Canada |2012 | 45 mins | English | G

It’s one of the most popular sports on the planet and has a strong root in Canada’s history. Cricket Nation looks at the widespread impact of the game on various Canadians including some beer league hockey players who gave the sport a try.

The 1983 US-led invasion of Grenada, which followed the execution of Prime Minister Maurice Bishop, echoed around the world and ended a unique experiment in Caribbean politics. What were the circumstances that led to this extraordinary chain of events? This comprehensive, gripping and revealing documentary tells the story of the Grenada revolution as never before. The film features extensive, previously unseen file footage, as well as old and new interviews with many of the key players of the time.

Alison Hinds will be present for the Q&A!

Two Smart is a Barbadian psychological thriller about a disgruntled married couple and a hitchhiker trapped in a gully during a tropical storm.